Made it to Yorktown today, a beautiful day; clear, a few thin clouds in an otherwise blue sky, gentle tailwinds, cool (about 60 degrees or so). Got the required pictures in front of the Yorktown Victory Monument, celebrating the surrender of Cornwallis’ forces during the Revolutionary War. We missed the part where you’re supposed to go through Yorktown’s Main Street, and started right down the Colonial Parkway. 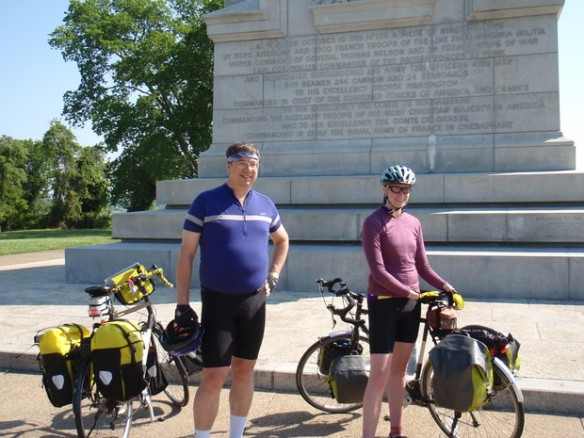 Dipped our toes in the York River a few miles later — hey, it’s salt, so it still counts!

Pat getting his toes wet! 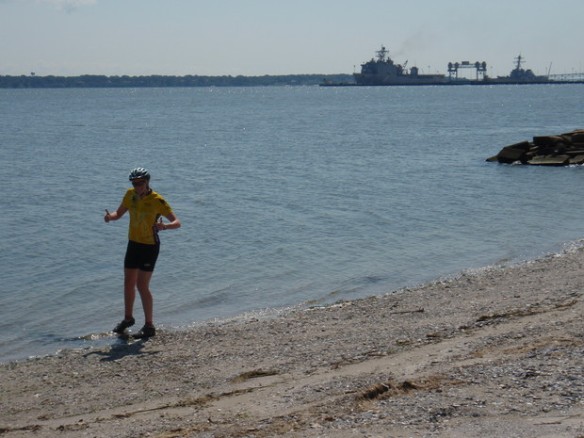 Virginia getting her toes wet!

A nice ride, past a few naval installations, a few ponds and salt marshes. It was breezy enough we had no problems with mosquitoes. A good thing, because my bike was loaded and handled like an iron pig.

Then a few miles later on, something went clunk. I thought at first it was my front wheel — the bearings were slightly loose. But the clunk continued, once per pedal stroke, and was preceded by slack with every stroke. Pulled into the Colonial Williamsburg visitor center a few miles on, and really, really checked out the bike. The rear dropout was sheared; I was done for the day after 13 miles. Yes, I broke my bike.

An hour of frantic calling later, and REI (who made my Novara Randonee) had agreed to replace the bike. Luckily my wife, who drove us to the coast, was still here with the car, so we had a road trip in the middle of this road trip. The guys at REI apparently did a good job moving everything over. I say apparently, because there’s still another 4,290 miles to check out their work.

Tomorrow we’ll ride out of the hotel, and see how far we can get. We’re about two days down, which isn’t a good way to start. But there’s still enough time that I hope, if we can pick up the pace a bit, we can finish this trip.