With wife and older daughter overnight, we didn’t push to get very far today.  So it was late by the time we started, and relatively early when we finished, and after the last two days, that was fine by me!

I was frankly hurting a bit today, and didn’t have much power.  But that was OK, as most of the hills were in the signs.

These were some more rotten roads, but through pretty territory at the Crab Orchard National Wildlife Refuge.  We didn’t see any significant wildlife, but then it was the middle of the day.  I did wonder, though, what gave Devil’s Kitchen Lake its name.

Coming through the outskirts of Carbondale, there were piles of trees that had been cut up and were waiting to be carted off.  Here’s a small one — some of them were so big I wanted to cry, because they’d make some magnificent oak or other hardwood timber. 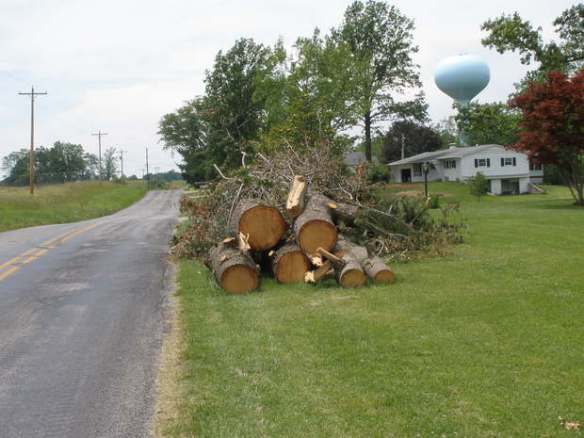 Not one of the bigger trees that were down

Turns out they had a heck of a wind storm just a month ago.  Some of it looks like nature’s pruning, though.  See how much rot was in the middle of this tree?

This tree needed some trimming

We crossed the Big Muddy River, which is a big, muddy, well, maybe just a creek.  We got into Murphysboro, the end of our third big map.  (Does that mean we’re a quarter of the way there?)  Rode in a car back to the hotel, so we’ll be ready to go tomorrow.  At least I hope so!