Fairly short ride today, at least compared to the last couple of days.  I don’t know if I mentioned it, but the Beaverhead valley yesterday was heavily irrigated for hay and pasture.  It wasn’t all that picturesque, but Montana ranchers have to feed their livestock somehow.  I wonder, though, what the differences are between the Madison and the Ruby and Beaverhead, that the Madison is left mostly free-flowing (and trout-raising).

Well, today we left the Beaverhead with a 19 mile ride up to the first pass of the day, Badger Pass.  Once again there was a lot of irrigation on the way up, and a lot of ranches and houses on the way.  Some of these houses leave me wondering if people live in them all year, or if they’re summer-only houses.  They’re just awfully big, with windows that look too big to heat.  Still, there was a nice view on the way up, and a beautiful, unspoiled view up on the saddle before we hit the top of the pass.

Last look at the Beaverhead Valley

Saddle near the top of Badger Pass

Flew down the other side, naturally, to Grasshopper Creek.  This is a beautiful little valley, and I’m kicking myself for missing a beautiful picture.  (But it was so nice riding FAST!)  The creek itself meanders back and forth across a meadow, as if it thinks it’s a big river on a flat plain like the Mississippi.  In the process it seems to water a wide swath – I’m not sure if it’s irrigated, too, or if the creek just naturally spreads the wealth.

There was a road construction zone in the Grasshopper valley where they were sweeping up the gravel after a chip-and-seal job.  They had pace cars, I mean escort trucks, for the cars and RVs, but they just let us cyclists ride on through.  It’s better that way, as we can’t maintain a 25 mph pace for 10 miles.  There were only a couple of places on the road where crews were really working, so we didn’t mess things up too badly.

Looking back at Grasshopper Creek valley

We met up here with a lady who’s been doing a bike tour of the state of Montana.  She’s a teacher up north, and managed to tie up the lower house of the legislature when she was elected.  We spent some of the time on the next climb chatting; she has an interesting viewpoint, that it’s up to the 60-80% of the centrists to actually run the government, while the fringe politicians on left and right get all the publicity.  Then it was time for the Big Hole Pass.  It’s actually higher, at some 7,300 feet vs. 6,700 feet, but it was generally easier because we started higher.  Only a couple of miles of steep stuff, and a similar drop on the other side.  We crossed Bull Creek, which then flows into Governors Creek.  That seems about right, the Bull is in the Governor before it reaches its mouth.

Hey, don’t blame me.  I didn’t name these creeks!

Looking down at the Big Hole River valley

Just before we got to town, we passed some weird hay piles.  Now I’ve seen square and round bales, in two sizes each, and I’ve seen haystacks, but I’ve never seen something like this.  It looks like a truck-sized hay pile.

We brought lots of extra water, which we didn’t need too badly.  We hit the first town, Jackson, after 49 miles.  It’s been cool on the passes, but it warmed up to about 80 degrees as we got to town at noon.  As I need the rest, we stopped here.  Great deal; the lodge was full, but for $10 a head, they let us camp out back, use the shower, and did I mention there’s a hot spring here?  Supposedly it comes out of the ground at 58° C.  We soaked in the hot spring pool as long as we could stand it – about 15 minutes in my case.  It stung all my bug bites and scrapes, but helped ease my legs and the knot I’ve had in my shoulder the last couple days.  Only problem is, that’s all they have, so the showers are way hot.

It looks like a tent city out back; we’re sharing the yard with a supported Adventure Cycling group, and at least one other cyclist.  I’m a bit surprised more people didn’t want to roll the 18 miles down to the next town, but this is a nice place to stay. 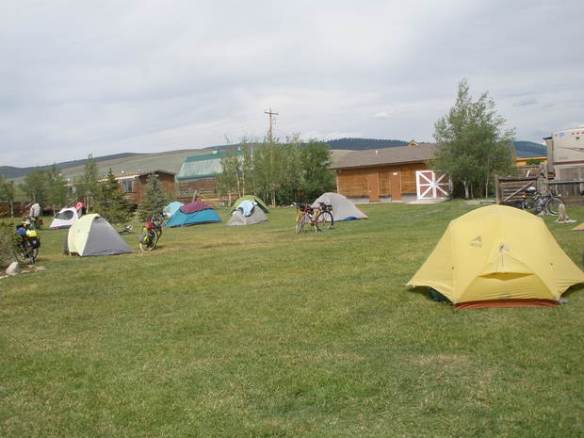 Tent city out back

No cell service here, but somebody has an unsecured wireless connection, so I’m pirating it to post tonight.  It’s surprising how few times we’ve had neither cell nor internet — I think the grand total so far is once.  There were another two times we could push a text message out via cell.  That’s progress, folks!

There was a surprise at dinner.  The restaurant across the street had some stuff going on with respect to ownership and management, and they’ve closed.  The spa has a restaurant that’s rather pricey, and they don’t allow campers cooking on their grounds, so we were stuck.  The Adventure Cycling group had it worse than us, since they’re on a budget and there’s six times as many of them.  I guess that’s part of the “adventure.”