This day didn’t start out too well.  Antler Inn is upstairs above a restaurant, but they lock the bikes in a storefront two doors down.  We were ready for an early start (breakfast at the gas station down the street), but they don’t staff the front desk until 7:00.  Well, the restaurant opens for breakfast at 7:00 too, so let’s go ahead and eat here.  Good food, but it delayed our leaving by an hour.

Foggy morning again today; we could see zero peaks in any direction.  A few sprinkles came out of the fog, making eight straight days we’ve been in, or seen, rain.  The fog aggravated Virginia’s asthma, so she called a halt on the first major climb for an inhaler.  That did the trick; after 13 foggy, mostly downhill, miles we broke through into sunlight.  If we can make it rain by putting on sunscreen, why shouldn’t we be able to make it sunny with an asthma inhaler? 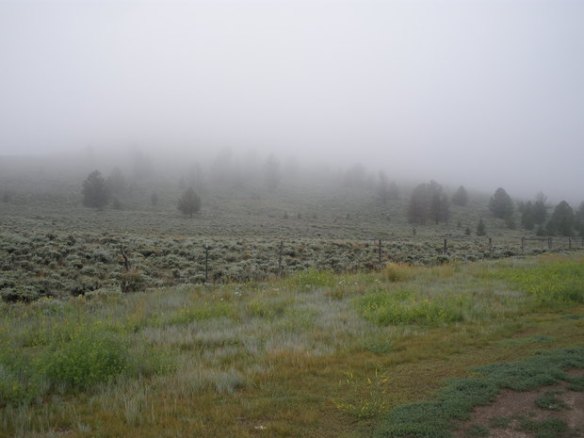 Where are the snow-covered peaks?

Broke through into sunlight!

Pretty soon she was back to normal, and we hit the Wyoming state line.  State #6, new state #3 for me! 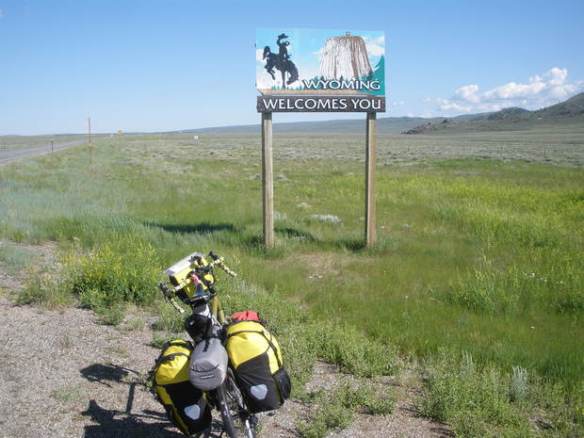 We picked up a tailwind that was great, plus we were mostly coasting downhill.  We dropped almost 2,000 feet for the day, following the Illinois, Michigan, and Canada Rivers (although those three looked more like double-wide trailer-sized irrigation canals), as well as the North Platte.  The North Platte and Encampment rivers were pretty good-sized, especially after the Encampment flowed into the Platte.

I think I remember that Wyoming is the most sparsely populated state, but the North Park area of Colorado can give Wyoming for the money.  Some irrigation, quite a few cattle, but little sign of humans.  Only a road every few miles, and a house or two and a few outbuildings every few roads. 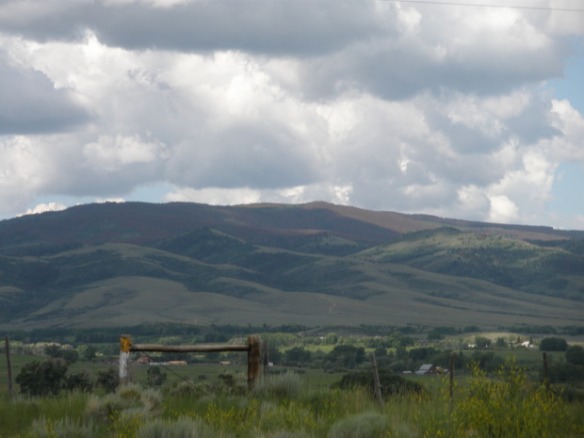 In Wyoming, there were some tall mountains to the east and west at first, and a few more hills.  You can see forever!  From the top of a good-size hill you can sometimes trace out five miles or road ahead of you. 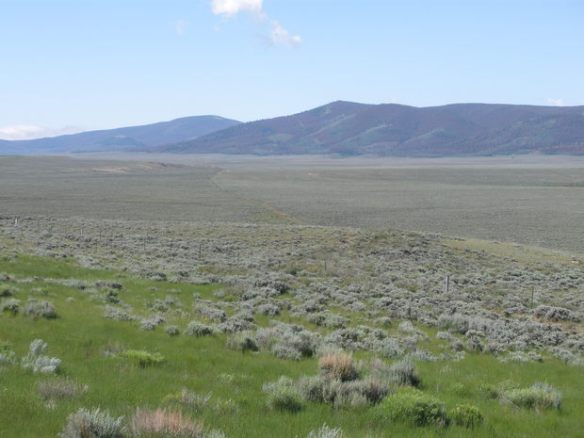 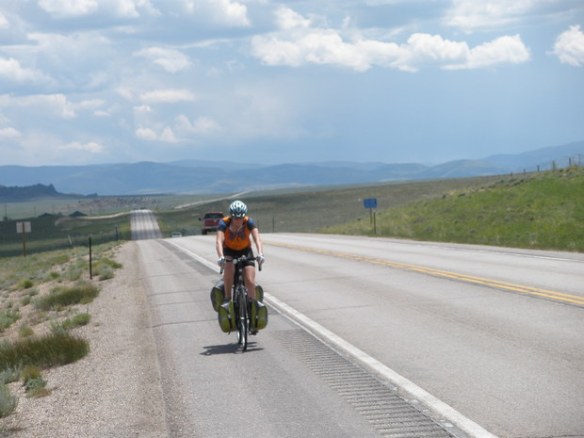 And that's where we came from

That lovely tailwind shifted to a west wind, and pretty soon we headed into that headwind to reach Riverside — the first town in 50 miles.  Fortunately, this town of 69 has a diner, so we had lunch there.  Then it was back to the cross wind into Saratoga, 18 miles away.  Unfortunately, it was after lunch for all the Fourth vacationers, and the traffic really picked up.  Lots of pickups pulling four-wheelers, maybe half the traffic.  Half of the rest had a camping trailer and the other half had boats of various sorts.  I think all the locals stayed inside to watch TV — maybe they’re watching Le Tour de Lance?

Saratoga has a hot spring, and a donation-supported pool.  Very nice, except the hot pool was too hot!  Some of the locals said a recent earthquake had heated up the volcanic pool a bit too much.  But we showered, found an ice cream store (like they don’t have in Silverthorne, Frisco, or Dillon!); I had a double with peach ice cream and orange sherbet.  Yum!  Dinner, then out to a wild mosquito refuge to camp.  Lovely place, and we even saw a pelican flying over.  (What’s a pelican doing in Wyoming, of all places?)  While the breeze was strong, sitting at a picnic table to write this journal was OK, but as the showers approach and the wind drops, the mosquitoes are finding holes in our clothes and DEET.  Early bedtime!