At my workplace, one common saying is, “I’ve lost the bubble on that.”  As I understand it, the saying is derived from a carpenter’s level.  I felt like that today; I had to judge level, uphill, and downhill, on whether I was pedaling hard, easy, or not at all.  After a hard hill, a slight uphill looks easy, but if you’re not pedaling, you’re not going forward.  On the other hand, after a steep hill, I was sometimes surprised to be rolling without any effort.

We ate our way across the ridges today.  Started out early, after the continental breakfast at the truck stop, taking the interstate frontage road for 6 miles into Wytheville.  Noisy, Virginia was bothered by the fumes, and I was bothered by having to get into my lowest granny gear to go up a hill that I should have cruised up in the middle ring.  We stopped for “second breakfast;” don’t Tolkien’s hobbits have wonderful ideas?  Bacon, eggs with salt, grits; after loading up on salt, carbs, and water, riding out of town was ever so much easier. 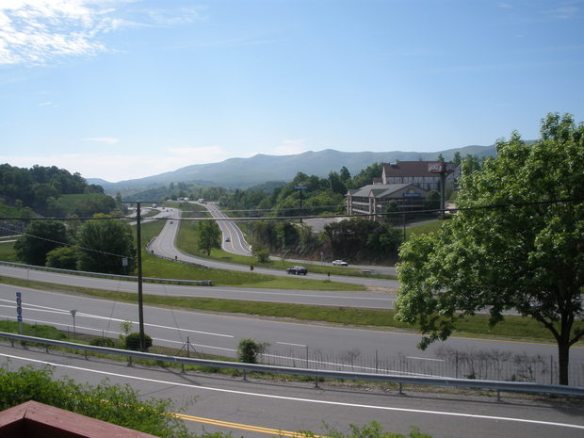 Virginia was riding strongly – she was out of sight by the time we made Rural Retreat, but I saw her bike parked outside the store.  Apparently Rural Retreat is somewhat famous among the railroaders for the twin 100′ towers.  They look like water towers to me.  (Apropos railroads, Lithia is another landmark.  We passed through there a couple of days ago.  Nothing but one of the most beautiful valleys there, I wonder what its claim to fame was?  There was a Lithia Rd. all the way down outside of Radford.) 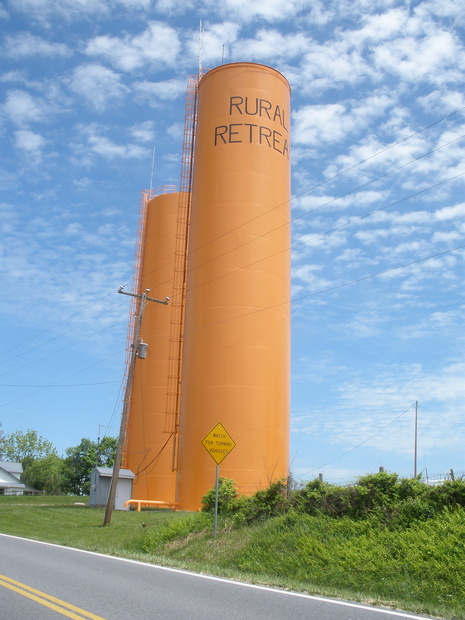 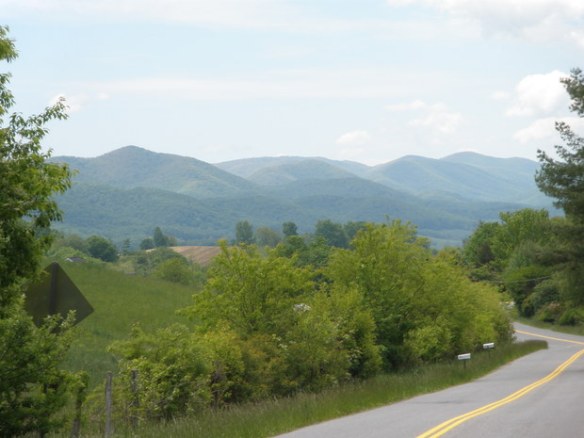 That's what we're headed for!

After an early lunch in Rural Retreat, we headed up to the foothills.  6400′ of climbing ahead of us, although I didn’t know it at the time.  Virginia had her usual post-prandial slump, and I was able to climb ahead of her for a while.  The road into Sugar Grove was a bit busy, but otherwise a good road with good sightlines and pavement.  We stopped there and ate the watermelon slices I’d bought in RR.  They were good, sweet, and juicy.  Sorry, Mom, it’s not the Fourth of July, but it was still a good watermelon!  We could see the mountains ahead of us as we headed toward Troutdale (not to be confused with Troutville!).  The road was a fairly easy grade as we climbed up, compared to some of the county roads we’ve seen that needed steps. 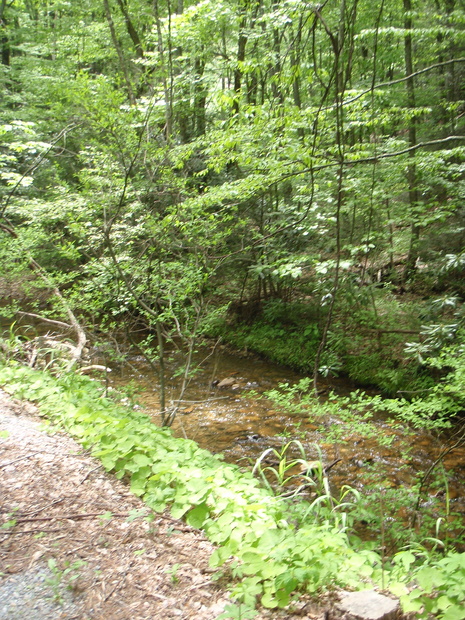 Babbling brook along road up from Sugar Grove 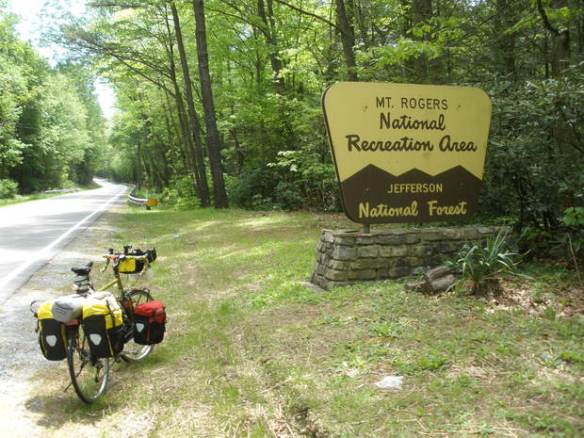 I had sort of planned to stop for the night in Troutdale, but we got there too early.  Virginia pulled out her persuasive powers: Look, Dad, we’re almost to the top!  It’s just 3:00 in the afternoon!  Sure there’s another mountain, but it’s only four or five miles of climbing!  It’s just 22 miles, and most of that’s downhill!  I caved.

Again, the grades were not too bad, but the sightlines decreased, and we ran into a stream of horse trailers headed for a weekend in the mountains.  It was tough letting them get around us, because they couldn’t accelerate like most other vehicles could.  They were still considerate and polite, but I was glad to get past the horse camp.  Turned out it was seven miles uphill, not five, and I was glad to see the top. 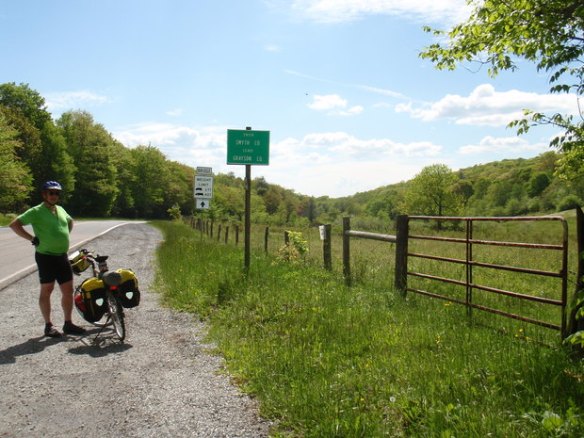 Made it! High point on the ride so far.

This is the highest point on the route this side of the Mississippi.  We’ll still have more hills, and I’ll probably be griping about them, but in sheer altitude, it’s downhill from here.  For a while. 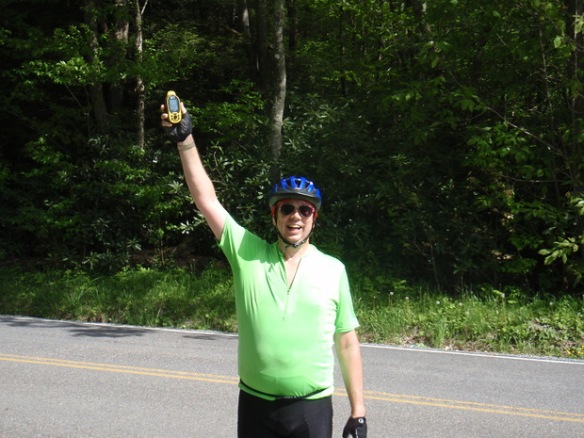 Look at the GPS. It's higher than you think!

Things picked up going down.  Whee!  I suppose some motor vehicles could have passed for the first couple of miles, but there weren’t any as we coasted downhill at 30 mph plus, slicing through the curves.  (Downhill!  My favorite way to ride!)  The road flattened a bit through Konnarock, then turned uphill for a bit.  We considered taking the Virginia Creeper Trail, but were leery of how the cinders would float our loaded bikes.  U.S. 58 has to be one of the prettiest highways I know, and that’s aside from any prejudice I might have from living in Damascus as a child.  So we joined U.S. 58 and cruised all the way into downtown Damascus, arriving just after 5:00. 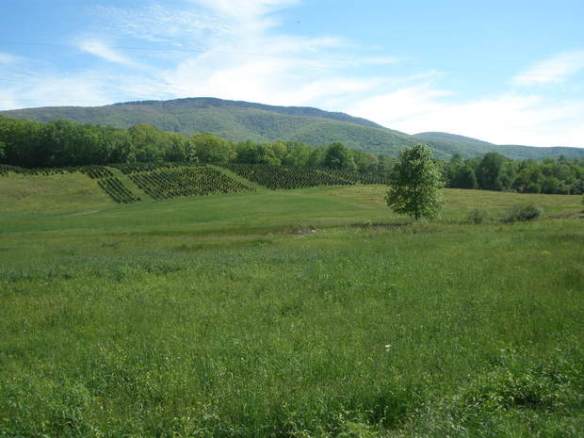 Looking back toward Whitetop (with Christmas tree farm) 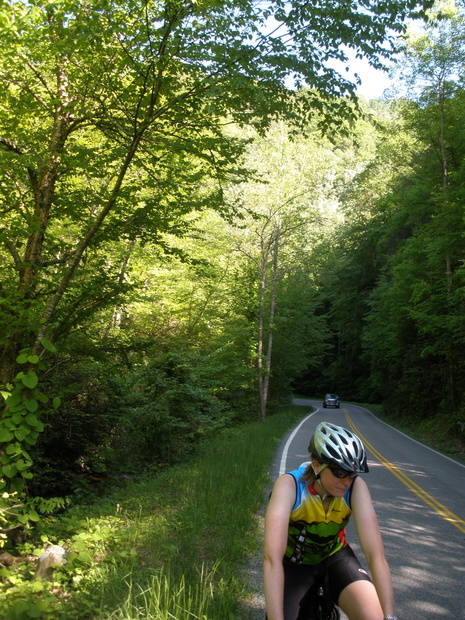 US 58 carved out beside the creek coming into Damascus

College friends (Phil and Linda) graciously invited us over, so we’re taking a day off and spending some time at PipLinda Inn.